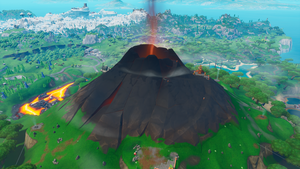 The Volcano was an unnamed POI located in the northeast corner of the map. It was west of Tomato Temple, southeast of Sunny Steps, southwest of Lazy Lagoon, north of Retail Row, northwest of Lonely Lodge and northeast of Dusty Divot. It was added in Season 8, destroying the Container Yard, hence the containers strewn about the outside of the Volcano, as well as a part of Wailing Woods. It contained The Prisoner's lair and a lot of lava, the inside also included the eggs previously found in Polar Peak. It seemed to be the biggest climbable area on the map. It was a large part of the map and seemed to rival Polar Peak. 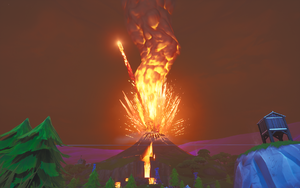 Volcano during The Unvaulting Event