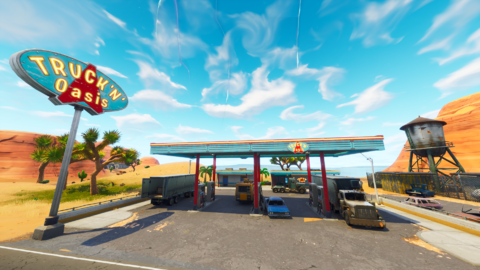 Trucker's Oasis was an unnamed POI in Battle Royale, located southwest of Moisty Palms. It was a gas station with some trucks located in the south of the desert. It belonged to Truck 'N' Oasis. It was located on G9 coordinates.

In week 5 of Season 10, a rift beacon was constructed nearby the gas station. This beacon caused it and the Pueblo village to be transformed into the Pandora POI. However, it reappeared in week 7 after the Pandora was removed.