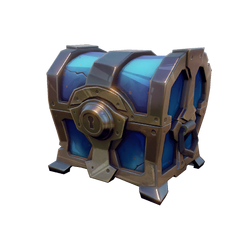 A tier 3 treasure chest, which is often found in Canny Valley. If a tier 3 chest shakes while looting, it's certainly a mimic.

Treasure Chests are lootable containers that contain a variety of valuable items, including Weapons and Traps. They can be found throughout the world in Save the World.

In Save the World, Mimics take on the appearance of blue "tier 3" chests which wake up and attack when interacted with or if they take damage.