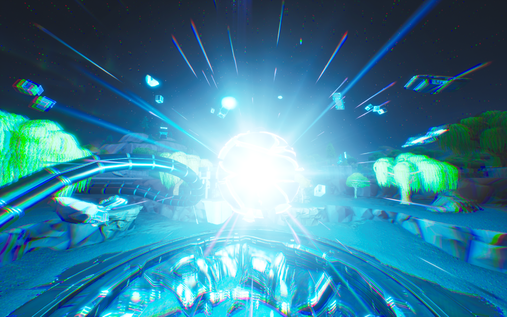 The Zero Point is the vault’s core in Chapter 1. The vault contains unvaulted weapons and could only open when runes appeared and activated in their slots. During The Unvaulting Event in Season 8, the orb was seen behind a desk.

It was first referenced during the original Rocket Launch before it began tampering with reality.

During Season 9, the orb was seen again after The Final Showdown Event. Mecha cracked it to beat the monster who was seemingly after the same power. The orb began to crack until Season 10 began. The cracks before were large and launched tendrils of energy.

The Zero Point During the end event.

The Zero Point Exploded causing Jonesy to be transported to another dimension, where he saw some of the past seasons' objects. At the end of the trailer Jonesy was transported back to the Battle Royale island where time merged with right before the meteor impact and post Season 9 time. The Zero Point was frozen in mid-explosion. The Zero Point is an orb that is surrounded by an anti-gravity field similar to the one the CUBE produced. It becomes cracked when a new Rift Zone is close to opening.

During The End event a rift appeared above the Zero Point after the meteor was sucked into a rift. A rocket came out of the rift and pointed a laser toward it, just like it did in Season 4 towards Tilted Towers. The Rocket collided with the the Zero Point and sent out a huge shockwave, knocking all players into the air, then the meteor came out of the rift with 6 other rockets surrounding it, eventually the meteor collided with the Point's forcefield, which it bended, until the meteor destablyized the Zero Point creating a massive explosion. Shortly after, the energy condensed creating a black hole that acted as a bridge to the Chapter 2 map. The players in the lobby also experienced the event sucking them in as well.

The Zero Point has a humanoid form called Zero. It's canonicity to Battle Royale's storyline is yet unknown, as it might simply be just a outfit based off on The Zero Point.