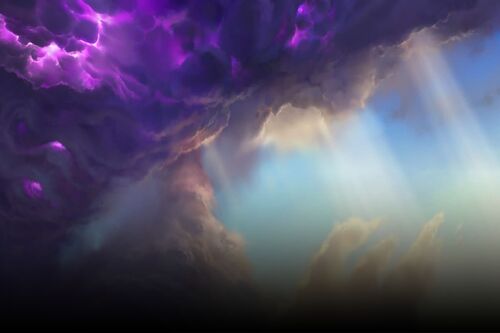 In Battle Royale, the storm is an tsunami outside of the current safe zone. Any player outside the safe zone is in the storm and takes damage. Over the course of a game, the size of the safe zone progressively shrinks, forcing remaining players into the same location.

The safe zone represents the eye of the storm, and is the shape of a circle centered somewhere on the map.

As of June 15th,2020 The Storm has been changed into "The Wall of Water" a sea mass that was created after one of the visions The player had seen in "The Device" Live Event. However as of June 17th this change has been reversed back into the original storm alongside the release of Chapter 2 Season 3 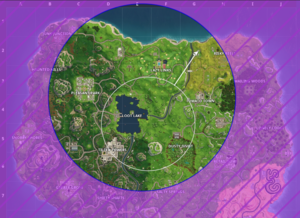 A non-moving storm circle. The new circle's center is within the current safe zone, and does not move into the current storm. Safe zones 1 through 4 shrink this way. 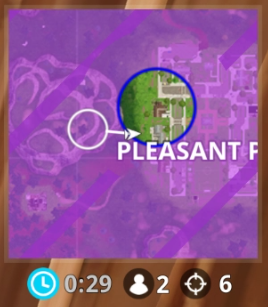 An example of a moving storm circle introduced in 5.0. The new storm circle center is outside the current safe zone area. Safe zones 5 and later will shrink this way. It was removed in 10.20 Patch., but it's still available in competitive gamemodes.

The safe zone and storm move in phases:

Each storm circle that appears is smaller in radius than the previous circle, with a center chosen randomly.

Safe zones 1 through 4 are "non-moving": they will shrink to a storm circle with the center somewhere inside the current safe zone.

Safe zones 5 and later are "moving" in competitive game modes: they can shrink to a storm circle with a center somewhere outside the current safe zone.

In the standard game mode, the first safe zone initially covers the whole island and is not visible on the map.

1 minute after the Battle Bus finishes crossing the map, the first storm circle appears on the map, showing where the safe zone will first shrink to.

Storm Circle 10 has NO safe zone.