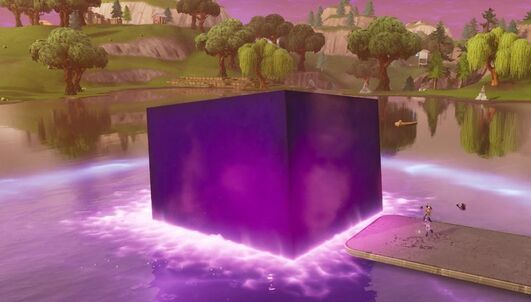 The Sinking Event was a Live Event that took place on September 19th 2018 when the CUBE rolled to the end of the dock of the Factories at Loot Lake. When it came to the end of the dock their was nothing but water, but it rolled again, into the water and started sinking very slowly. The water around the Cube started turning purple slowly spreading away from the cube as it sunk. By the time the cube finished sinking the entirety of Loot Lake was purple, a few seconds later the lake instantly turned a much more broad shade of purple, bouncing all players in the lake into the air and the lake became bouncy.