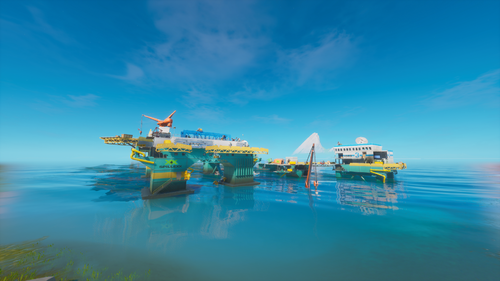 The Rig was a named Point Of Interest in Battle Royale which was added to the Map in Chapter 2 Season 2, located inside the coordinate B7, at the far southwest portion of the map, far south of Holly Hedges and west of Slurpy Swamp. It was an oil rig located out at sea. It was owned by a company called Spillexx, however the organization A.L.T.E.R now uses it as a spy base. TNTina patrols the area with her Mythic Ka-Boom Bow!.

The Rig was currently partially destroyed by an explosion. The oil from the oil platforms is leaking into the water.

In Chapter 2, Season 3, The Rig has been seperated even further by the flood, and has become rusty. It is now a named location called Rickety Rig.

For more details on structures, visit The Rig/Buildings 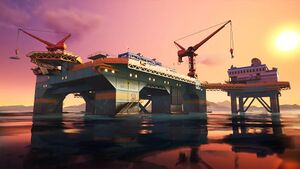 The Rig before being blown up