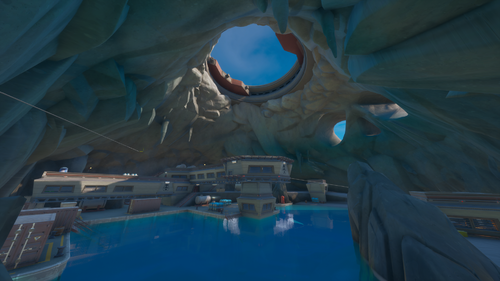 The Grotto was a named Point Of Interest in Battle Royale added in Chapter 2 Season 2, located inside the coordinate H5, directly in between Dirty Docks and Retail Row. It was an underground facility created by the organization A.L.T.E.R. The facility had computer-controlled Shadow Henchmen that patroled and guard the area. Brutus patroled the area with his Mythic Minigun, which is dropped upon his death.

There were multiple phone-booths available for players to disguise themselves as Henchmen, as well as several ziplines. Security equipment, such as cameras and turrets are set up all throughout the main base, locking on to players that are not disguised and damaging them.

For more details on structures, visit The Grotto/Buildings