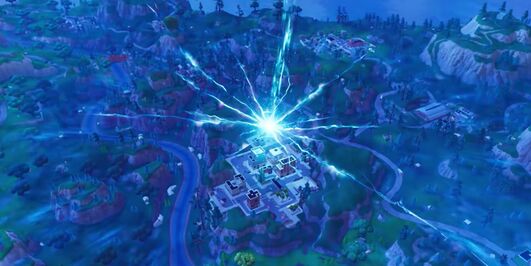 The Blast-Off Event was a Live Event that took place on June 30th 2018, the countdown expired and the rocket took off slowly from the Villain Lair (POI). After a couple of seconds, the thruster flew off and landed at Anarchy Acres. The Rocket sped up and went up, going to the atmosphere. It stopped flying and a messaged was heard across the map saying: "Zero Point Oscillators On, Setting Coordinates..." and some weird noises also appeared. After the message appeared, the lasers turned on and were pointing at Tilted Towers. The rocket boosted really fast, but a big rift appeared over Tilted Towers and swallowed it. Another rift appeared above Moisty Mire and the rocket flew out of it. It was speeding around the map, going over Retail Row, Wailing Woods, then taking a sharp left turn, flying over Loot Lake, then went through Greasy Grove and where the Viking Outpost would eventually be placed before another big rift appearing and taking the rocket. Another big rift appeared over Loot Lake, making some sounds before letting the rocket out and flying up to the sky, before making a big crack in the sky, and then it disappeared.

After the crazy event, things from the Battle Royale map started to disappear and things from our world started to appear. Every day, a rift would appear on a different object, then 24 hours later the rift will take the object, bringing it to our world. The first thing to disappear was the Lonely Lodge sign, then the Motel sign, then Tomatohead, NOMS sign, and the Durrr Burger. then Over the couple of days, the crack started to expand over near Greasy Grove. After 2 more days, it expanded over Anarchy Acres. On the last day of Season 4, it expanded over to the Race Track. The cracks would eventually lead to the addition of Viking Outpost (POI) in place of the large hill by Snobby Shores, Lazy Links which replaced Anarchy Acres, and finally a new desert biome replacing Moisty Mire, featuring new areas such as Paradise Palms and a new Race Track (POI).