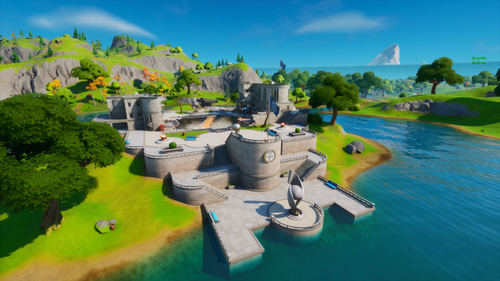 The Agency was a named Point Of Interest in Battle Royale on the Chapter 2 Season 2 map, located inside the coordinates D4, E4 and E5, at the direct center of the map, east of Salty Springs, south of Risky Reels northeast of Weeping Woods and southwest of Frenzy Farm. It was an Agency run by Ghost until The Device Event. The Agency replaced Eye Land with the addition of Chapter 2 Season 2. Midas patrolled the area with his Mythic Drum Gun. Henchmen, cameras, and sentry turrets were also located throughout The Agency.

The Agency was set to be the prime location of interest for the Doomsday Event.

For more details on structures, visit The Agency/Buildings