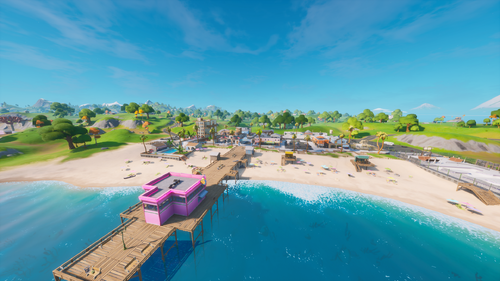 Sweaty Sands is a named Point Of Interest in Battle Royale which was added to the Map in Chapter 2 Season 1, located inside the coordinates B3, C3, B4 and C4, northwest of Salty Towers, north of Holly Hedges, south of Coral Castle and southwest of Pleasant Park. It is a beach town with white sands and clear water, along with a big hotel, pier and ice cream shop called SoFDeeZ. The layout of this POI resembles Paradise Palms from the original Battle Royale map from Season 5. Sweaty Sands has the most chests of any location in Chapter 2, with