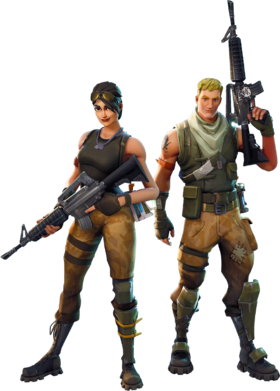 The Soldier is one of the four playable Hero Classes available in Fortnite. They are a well-rounded class, with passive abilities revolving around optimizing ranged combat, either through reducing recoil, reducing reload time, or simply increasing damage using Assault Weapons, Submachine Guns, and Shotguns. They also have various active abilities that give them some degree of versatility in combat, such as their

Frag Grenade, their ally-buffing War Cry, their suppressive Minigun, their dual pistolsLefty and Righty, and their Shockwave (weapon). Their favored weapons are Assault Rifles, Submachine Guns, and Shotguns.