Season 5 of Battle Royale ran from July 12 to September 26, 2018. The "Worlds Collide" theme was unveiled on the final teaser. The theme for Season 5 is a mixture of real-world era crossover after the rifts spawned (from the previous Season) took out different objects from the island and summoned a few real life objects that were virtually converted to play a role in Battle Royale. The DURR Burger actually appeared in real life in the California Desert, hence the, "Worlds Collide Theme."

It also features a new map desert biome, brand new named locations such as Lazy Links, Paradise Palms and other POIs (points of interests). A new type of 4-player vehicle was also released on the initial patch. Toys feature that can be used in game to perform an action and interact with a golf ball, beach ball and basketball were also added as part of Battle Pass rewards.

Starting in Season 5, progressive challenges will no longer be restricted to a single season and can now be completed at personal pace. Season 5 was set to end on the 25th of September but was extended until the 27th. During the final weekend, 400% Bonus XP were activated to all players.

Starting July 9th, Epic Games release a daily series of teasers that hints about the upcoming theme of the season. "Worlds Collide" theme was been revealed on the final teaser pre-season. 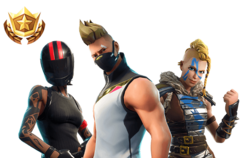 The Battle Pass for Season 5 was available for purchase for 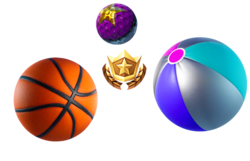 Toys were added to Battle Royale and can be equipped through the locker emote slots. It can be used in-game to perform an action such as shooting a Basketball, tossing a Beach Ball and swinging the equipped pickaxe to hit a Golf Ball with the toy props being able to spawn in-game. Toys can be obtained as Battle Pass rewards and comes in Rare and Epic rarity.

Season 5 introduced a lot of new items in Battle Royale ranging from weapons, limited-time elements, utilities and a new vehicle. Aside from new releases, an item was also reintroduced as Guided Missile returned in 5.10 Content Update from the vault. 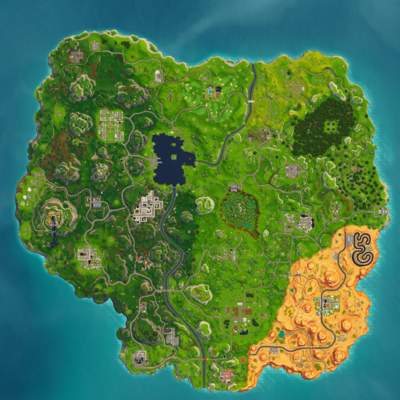 Map has been updated with a desert biome, new major locations such as Paradise Palms, Lazy Links and few unnamed POIs. New areas took place on the previous mysterious artifacts that spawned in Season 4. Rifts that are map objects that allow players to teleport in an adjacent aerial space while skydiving were scattered throughout the map.

Creation of the CUBE[3] 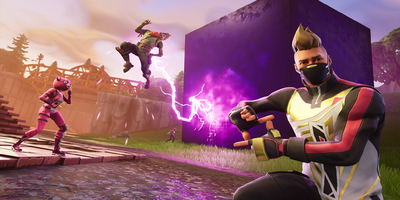 CUBE (also referred to as the Six-Sided Mystery), but more commonly referred to by the community, and officially referenced by EPIC as Kevin is an unknown phenomenon in Season 5. It spawned on August 25th on the area where the continuous lightning strikes have taken place destroying the formation of each cactus at H9. Standing nearby the cube regenerates player's shield every 2 seconds and displays glowing runes on the border part of the screen.

The CUBE knocks back the player when touched or hit with a pickaxe, and strikes static shock when shot with a gun which causes 30 HP damage disregarding any shield points. Under certain circumstances, getting eliminated by the cube’s lightning bolts or large knockback impulses will show a message in the Kill Feed that says ‘(Player) got too close to [rapidly flashing glyph symbols]’. Any dynamic entity including players, shopping carts and ATKs can be knocked away by touch. The cube can also destroy a map object and can kill a player if blocked while it rolls. The cube does not block fall damage if landed upon despite its bouncing properties.