Season 4 of Battle Royale ran from May 1 to July 11, 2018. Thematically, the Season focuses on super heroes, super hero movies, and gritty urban environments. Season 4 features the conclusion of the Meteor conspiracy that played such an important role during Season 3 with the complete destruction of Dusty Depot.

New places such as Risky Reels and other points of interest like Villain Lair, Mansion, Open Soccer Stadium were also added along with the fortnightly changes and update to the map.

Starting April 28th, Epic Games released a daily series of teasers that hints about the upcoming theme of the season. Posters that were released shows different characters on a meteorite fall vector alongside quotes. On the 5th day, Epic Games finally revealed a promotional poster with the silhouettes of heroic characters. 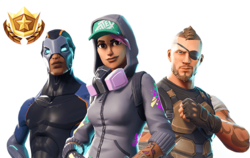 * Free Pass Rewards are included and are denoted with 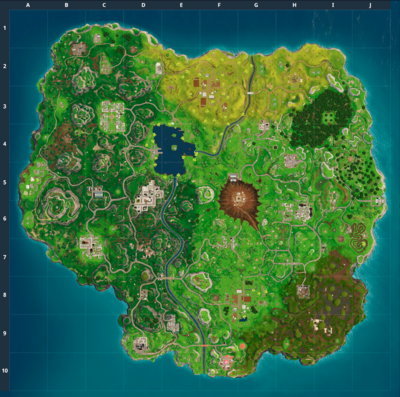 Along with the fortnightly patch and weekly content update, POIs and other areas of the map are also changing significantly in order to tell lores that were left unnarrated.

Season 4 has introduced a variety of new weapons and items in Battle Royale ranging from limited-time items, utilities, standard guns and Shopping Cart. Patch v4.2 brings off a new variation of Burst Assault Rifle that comes in Epic and Legendary rarity while on Patch v4.3, a limited-time Jetpack item has been released.

Patch v4.4 released Thermal Scoped Assault Rifle a new scoped-rifle that can see through player-builded walls and a new type of grenade called Stink Bomb that can damage a player on an small area overtime. A new type of pistol, Dual Pistols and a high-fire rate SMG Drum Gun were released on the Patch v4.5 pre-season ending update.

On June 28th, "Blast Off!" event notice was posted through in-game news flash, a one-time time event will take place in an in-game matchmaking on June 30th 10:30 AM PT.

Epic Games has releases ARGs (Alternate Reality Game.) that appeared to promote Season 5[1]. An ARG usually uses real-world clues to take players on a journey outside of any traditional entertainment medium. The ARG revolved around the rocket launch that created multiple rifts all across the Battle Royale Map.

On July 2nd, Epic Games announced #FortniteBlockbuster Contest wherein participants need to submit a filmmaking creation with the use of Fortnite replay system and in game virtual set to make a cinematic blockbuster hit highlighting the heroes of Season 4.