Save the World Events 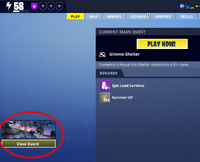 The View Event button in the Play tab of Save the World.

Save the World Events are time-limited thematic content packages revolving around Event Quests. They may feature new mechanics or introduce new heroes or weapons. Event rewards are earned by completing Event Quests or are purchased with various event currencies accrued during play. There is always one event featured at any given time.

The Event Page where players can view and progress through Event Quests.

Beyond the Stellar Horizon (event)

During Save the World Events, players may earn various currencies for completing quests and clearing missions. How much is earned for which activities usually changes from event to event.

Tickets are used to buy event llamas and ticket appearance changes with every new event. After an event ends, all remaining tickets are automatically exchanged for their respective Event Llamas.

Gold's primary use is buying seasonal items from the Event Store. Gold doesn't expire when a new event starts.

ticket. Event Llamas are the only source of Event Weapons and Event Heroes, one of which is usually guaranteed per Llama.