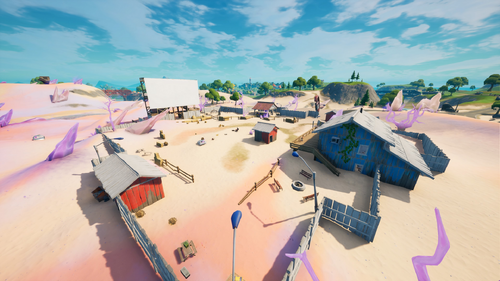 Risky Reels is an unnamed Point Of Interest in Battle Royale which was added to the map in Season 4, located inside the coordinates E3 and E4, northeast of Salty Towers, north of Zero Point and south of Blue Steel Bridge (POI). It is a sandy drive in theater with a ticket booth, projector, huge projector screen, food stand, restaurant, playground, public toilets and many, many cars. Chests could be found on the back of a few cars, caravans, some picnic tables, in the ticket stand and food stand, inside the projector screen scaffolding, in an electrical shack behind the projector screen, inside the restaurant, and formerly on a car on a nearby hill.

Risky Reels was formerly a named Point Of Interest added in Season 4, located north of Wailing Woods and east of Lazy Links. Throughout its previous lifetime, it played a few videos, the most notable being Prepare for Collision. It also played a small Wreck it Ralph cinematic for a few seconds in Season 6. It was originally released and added on the initial patch of Season 4. In the 5.10 Patch, Risky Reels was updated and repaired. The houses were fixed, fences have been painted and multiple chest spawns have been added on the new cars. The dirt mound from where the crater was was also patched up.

In Season 7, Risky Reels was crushed by The Block, leaving only the drive-in marquee left. However, The Block relocated northwest in Season 8, with the addition of the jungle biome, leaving no evidence that Risky Reels was ever there. In Season 10, a small shrine near Sunny Steps was changed to have a nod to Risky Reels, but as a two-person set up.

In Chapter 2, Season 1, Risky Reels was brought back to the map next to Frenzy Farm and became an unnamed POI. Also, Risky Reels has been rotated around, being moved from the northeast corner to towards the center. However, on Patch 12.50, Risky Reels became a named POI once again. It was the only named POI without a Reboot Van.

In Chapter 2 Season 3, Risky Reels became unnamed again and was severely flooded, leaving only the top of the screen accessible that has one chest.

However, on July 11th, 2020 in Patch 13.20, the water in Risky Reels receded, making the area completely dry again. As an aftermath, the vehicles are damaged and covered in seaweed, and some buildings and props were damaged as well, the location remains unnamed.

For more detail on houses and buildings, go to Risky Reels/Buildings 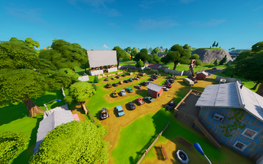 Risky Reels Before December 6 and after December 5