The robot companion of the player, she frequently is onscreen to remind players of an objective, berate their abilities, or even add a quick one-liner.

Ray is a female robot, created presumably by Dr Vinderman who assists the player in their quest to Save The World. She was designed to be Dr Vinderman's new assistant when Desiree left. Because of this, Ray is greatly inspired by Desiree and was built to mimic all of Desiree's likes and dislikes. According to the story, Ray's programming is faulty as she "fell on a puddle" and is unable to turn off certain features. Her only (known) goal is to assist Dr Vinderman; however, since he went missing Ray promoted The Player to the rank of Commander. 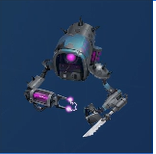 "Dark Ray" is an alternate version of Ray seen in the Long Road Home Questline.