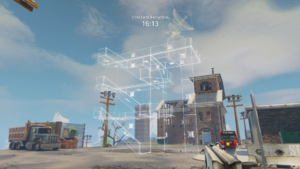 Radar Towers are side objectives in Save the World that require players to build a Radar Tower according to a holographic blueprint. They can be found around the map, usually in grassy areas on the outskirts of most zones, and are marked on the map with a blue radar dish icon. Activating a Radar Tower grants rewards as well as revealing certain valuable items on the map in a radius around the tower.

Radar Towers are the primary objective of the Mission type Build the Radar Grid, where players must build at least three Radar Towers within 20 minutes.

A Radar Tower appearing in the quest panel. This is a chest radar that must be built out of Stone and requires 25 building pieces.

If the player decides to build the Radar Tower, they must use the designated material to build the Tower according to the blueprint. Attempting to build with the wrong materials or using the wrong-shaped building piece will prevent the player from placing the building pieces until the correct material and shape is selected. The entire blueprint must be completed to activate the radar dish on top of the tower and receive rewards.

After completing the blueprint, the player must activate the tower by using the "interact" key (E on PC, square on PlayStation, X on Xbox) on the radar dish that appears at the top of the tower. Activating the radar dish drops reward caches at the bottom of the tower and reveals certain items on the map depending on the tower type.

Players may add up to five BluGlo (two BluGlo for the first increase, three more for the second) to the radar to increase the radar's reveal range.

In addition to the items revealed by the Radar Tower being an implicit reward, completion of the radar itself grants a reward cache of Materials, Wood, Stone, Metal, or Traps.