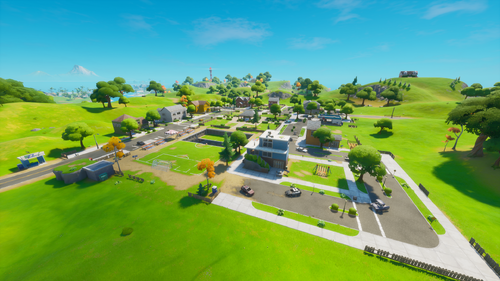 Pleasant Park was a named Point of Interest in Battle Royale added to the map in Season 1, located inside the coordinates D2 and D3, north of Salty Springs, northeast of Sweaty Sands, northwest of Frenzy Farm and southwest of Craggy Cliffs. It was a large suburban town with 8 houses, a park, an open soccer field, a gas station and a gazebo, with picnic tables, and trees surrounding it. Pleasant Park had

Pleasant Park was formerly located at northwest coordinates C3-C4, south of Starry Suburbs, southeast of Haunted Hills, northwest of Loot Lake, south-west of The Block, north of Gotham City, south of Junk Junction, west of Lazy Lagoon, north-east of Snobby Shores and very far north of Greasy Grove in Chapter 1. As of Chapter 2 Season 4 is has been turned into Doom's Domain.

For more details on houses and buildings, visit Pleasant Park/Buildings

This is a gas station with an Upgrade Bench and up to 1 Ammo Box. The dumpster here leads down to a safe house underneath the location.

The white house before Season 8