Pirate Camps were a series of 3 POIs (formerly 7) scattered around the map. They were comparable to the Expedition Outposts from Season 7 in terms of location and the fact that they reflect the Season's theme. Also, they were some of the only places to find Pirate Cannons besides Lazy Lagoon. Typically, the pirate camps were tall wooden structures built atop previously abandoned homes and buildings like the ruined bridge in Paradise Palms or the destroyed house near the center of the map. All pirate camps boasted a tall flagpost and a torn flag with the pirate symbol. They also had cannons aimed out the windows, stashes of treasure and chests and floor loot. 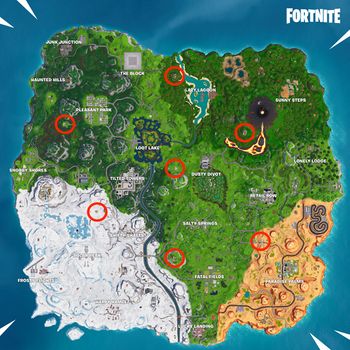