Ninja is a cosmetic item in Battle Royale that can be purchased from the Item Shop.

On January 15, 2020, Fortnite announced the Icon Series, which is based on popular celebrities from around the world. Ninja is the first who has been playing Fortnite for over 2 years, hoping to soon get a outfit in-game. He showed a preview of the outfit and a code that gives you the Ninja Style emote to viewers early.

The Outfit was released from January 17th, 2020 until January 20th, 2020. The Icon Series also contains Marshmello and Major Lazer (as well as Pokimane as an emote), with upcoming cameos of Loserfruit and TheGrefg shown in a teaser picture.

As the the name Ninja, suggests. He is the third Icon Series outfit to be released, this time, based off of the former popular Twitch and current Mixer streamer, Tyler Bevins. This outfit contains four styles, a default style, a style with the hood and mask up, one with the mask on with the face darkened, and the last similar to the default with the darkened face. The default and reactive style are both reactive. His headband grows longer the more eliminations you get until it glows. (Max is 8 kills). 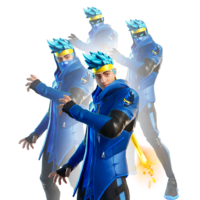