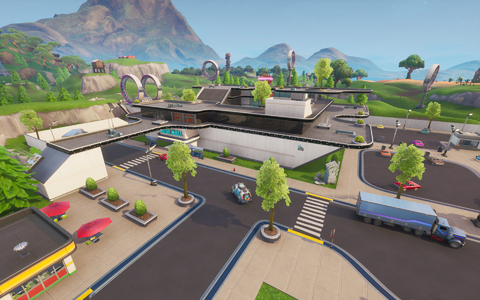 Mega Mall was a POI on the Fortnite Battle Royale map that was added in Season 9, replacing Retail Row which was destroyed in the Volcano eruption. It consists of a mall area with many stores, and a residential area, which is quite similar to the one that was in Retail Row.

It was located south of Pressure Plant, west of Lonely Lodge, northwest of Paradise Palms, northeast of Salty Springs and east of Dusty Depot.

In Week 2 of Season 10, a rift beacon was constructed in Mega Mall which turned the area back to Retail Row, but infested by Cube monsters from Fortnitemares 2018.

For more details on houses and buildings, visit Mega Mall/Buildings