Marshmello is a Reactive Outfit cosmetic item in Battle Royale that can be purchased from the Item Shop. This Outfit is reactive, and lights up by using musical emotes. The skin is based on the musician named Marshmello.

During Season 7, posters began appearing around the map featuring Marshemello. A large stage was set up in Pleasant Park, and a concert was eventually set up there, starring Marshmello as the main attraction.

Marshmello played music throughout the concert, such as Alone and Happier, while making players do things such as bounce around, and even fly into the sky. 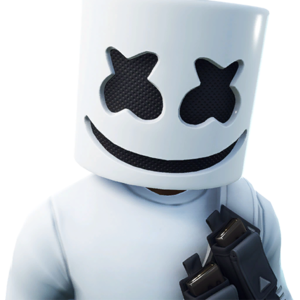