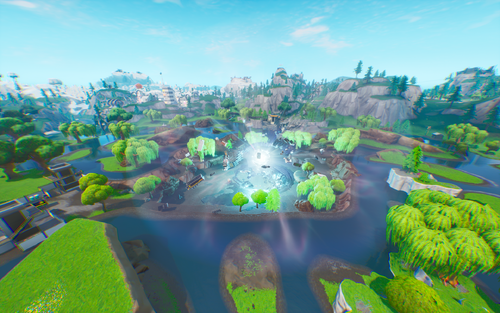 Loot Lake (known during Season 6 as Leaky Lake) was a named Point Of Interest in Battle Royale which was added to the Map in Season 1, located inside the coordinates D4, D5, E4 and E5, southeast of Pleasant Park, north-west of Dusty Depot, and southwest of Lazy Lagoon. Loot Lake is arguably the most changed location in the Fortnite map, being changed in Season 4, Season 5, Season 6, Season 7, Season 8, Season 9, and Season 10 - all in in completely different states. It is also arguably one of the most important – if not the most important location in the Chapter 1 Battle Royale storyline, being in some way involved in the live events of every single season except for Seasons 3 and 7. In Season 10, Loot Lake could spawn up to

Prior to Season 5, Loot Lake was a lake that had a house on its north shore, a house on an island in the middle of the lake and two factory buildings on the west shore. At the very end of Season 5, the CUBE had melted into Loot Lake, causing the lake to have the properties as did the CUBE—which made it bouncy.

When Season 6 released, the middle island rose out of the ground, the CUBE attached to the bottom. However, when the floating island started to move, the location was renamed Leaky Lake. This floating island, after taking a journey lasting around a month, it returned back to Leaky Lake. In a few days, the CUBE partially destroyed the floating island to kick off Fortnitemares. With its job done, the CUBE began to crack and leak into the vortex beneath. When the CUBE had released all of its substance into the vortex, the CUBE exploded, and the Butterfly event started. After the Butterfly event, Loot Lake had changed immensely. There were more islands in the lake, and there were shards of the CUBE.

At the beginning of Season 7 with Patch 7.00, Leaky Lake was renamed back to Loot Lake. Later on, it was covered in snow for quite a bit.

Loot Lake had remained dormant until Patch 8.40, in which the government had set up a lab around a giant metal surface that they had discovered. Runic symbols began to appear around this bunker - the CUBE fragments were supposedly disposed of by the government.

The metal surface turned out to be the Vault where all of the vaulted weapons were located. However, in The Final Showdown Event, the Mecha smashed open the Vault and used the Zero Point's power to defeat the Devourer.

At the start of Season 10, the Zero Point finally exploded. This caused time to stop around the center of the lake, making an anti-gravity zone with floating objects and the frozen, fractured Zero Point at the center. It also caused Dusty Depot and the Old Factories to return. Throughout the season, it also caused rift zones with special abilities to apear all throughout the map.

At the end of Season 10, during The End Event, The Rocket created a rift above Loot Lake, with lasers pointing down at The Zero Point. The Rocket blasted down and hit the anti-gravity zone, causing a huge shockwave. The Rift above Loot Lake opened again, and the 6 other Rockets flew down slowly with the Meteor, with it crashing into the anti-gravity zone creating a black hole, obliterating both it and The Zero Point. The entire game was sucked in, and so was Loot Lake.

For more detail on houses and buildings, visit Loot Lake/Buildings

The dancing platform and disco ball 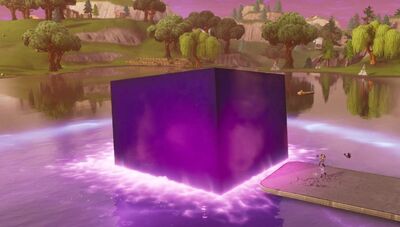 Kevin The Cube dissolving into waters of Loot Lake

The excavation site in Season 8