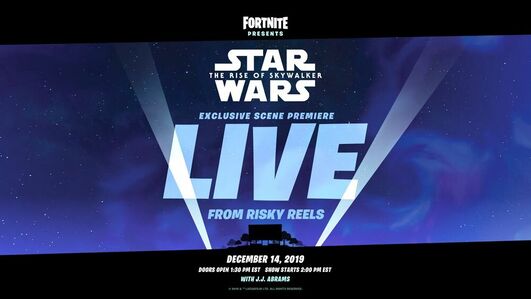 The Live At Risky Reels Event was a Live Event that took place in Risky Reels during Chapter 2 Season 1 on December 13th, 2019 at 2:00pm EST, exactly 1 week before the premeire of Star Wars: The Rise of Skywalker. The event is hosted by the host and creator of The Game Awards, Geoff Keighley, with the director of Star Wars: The Rise of Skywalker, J.J. Abrams, and Ben Schwartz as the Imperial Stormtrooper. At 10 minutes and 33 seconds till the event begins, Geoff Keighley is testing his mic and preparing the event. At 52 seconds till the event begins, Geoff Keighley announced the event is delayed by 10 minutes, although the timer counts down to 0, meaning that the event will start at 2:10 EST. At the start of the event, the platform below the timer rose up, when the Millennium Falcon appeared in the sky. It began flying around, and started going down to the risen platform. Before it did, multiple First Order Star Destroyers appeared in the sky. The Falcon flew off as multiple First Order TIE fighters began to attack and chase after it. The Falcon shot down one Fighter that crashed north of Holly Hedges. Then the Falcon splashed on Eye Land (POI) briefly (Now The Authority) Lake and flew over Risky Reels again before flying around a mountain and flew under the Blue Steel Bridge (POI), where a second TIE Fighter blew up. It continued to fly around until a third TIE Fighter crashed south of Slurpy Swamp, a fourth crashed north of Retail Row, and the last two crashed south of Steamy Stacks and east of Salty Springs. The Millennium Falcon began flying around the risen platform again, before the platform dropped down, at the falcon landed on it. Eventually, the door into the Falcon opened, and a person appeared on the platform, stating he was Geoff Keighley. As the character was emoting and talking, a chest began floating out of the Falcon, along with an Imperial Stormtrooper (Ben Shwartz) outfit behind it, emoting down to Geoff Keighley. Keighley and the Stormtrooper (Shwartz) began talking to each other before revealing J. J. Abrams, the director of Star Wars: The Rise of Skywalker. Abrams appeared from the ship, and the three began having a conversation with each other before giving the players a quiz on what exclusive scene they will show. The options were Darth Jar Jar, Jedi Mind Trick, Knights of Ren, and Rey & Kylo Power Ballad. Most of the votes chose Jedi Mind Trick, and the answer was correct. The scene began, showing a scene from Star Wars: The Rise of Skywalker. Rey, Finn, and Poe can be seen entering the landing zone of a ship, presumably some kind of Star Destroyer. While trying to get around, they are blocked by two First Order Stormtroopers. Rey uses a Jedi Mind Trick to stop the Stormtroopers. Abrams soon went back into the Millennium Falcon. The players were given one more vote, asking players for their favorite Lightsaber color. The options were Red, Purple, Green, and Blue. Before the vote ended, more TIE Fighters began shooting down at the Millennium Falcon. Keighley disappeared as the Stormtrooper (Shwartz) emoted into the Falcon. The Falcon took off once again, being followed by more TIE Fighters. The Millennium Falcon went into Hyperdrive, vanishing from the sky. As the TIE Fighters flew back to the Star Destroyers still in the sky, everything went into slow motion as what seemed like the voice of what seems to be Darth Sidious saying "At last the work of generations is complete. The great error is corrected. The day of victory is at hand. The day of revenge. The day of the Sith!" All the Star Destroyers vanished from the sky as every players screen became white.

While the event is played in English, the exclusive scene is localized in the player's selected language.