From Fortnite Wiki
(Redirected from J2)
Jump to: navigation, search

The Battle Royale Island is the main battle arena of Battle Royale. It consists of a 8x8 (formerly 10x10) grid with many major named locations and minor POIs (points of interest). After The End Event, the Zero Point collapsed into a Black Hole and sucked up the entire island, transporting everyone to a new island with some reccuring old zones from the Chapter 1 map. Each Season, new map locations or areas are introduced or removed. Sometimes Patches change the map in some way, such as the shack north of Fatal Fields (known as Hut Watch) from Chapter 1 being developed. 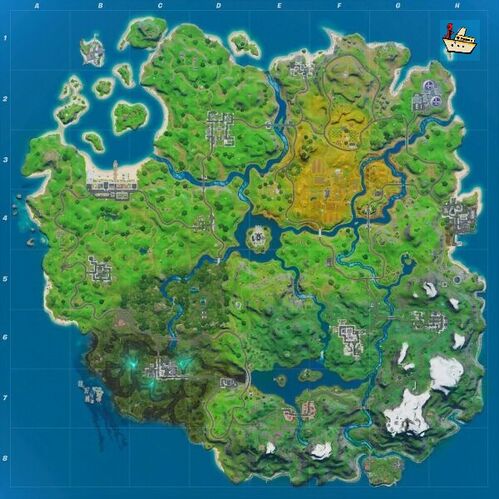 Locations are places that are specifically labelled on the map. There are 18 locations in the current version of the map, which are initially labelled as "???" (not to be confused with the landmark "???") and have to be visited to appear on the map. Visiting 10 out of the 13 locations is required to complete an objective for the New World Missions.

Lazy Lake is a location between Misty Meadows and Retail Row. It is a small city surrounded by lakes. It's design is similar to the designs of Tilted Towers and Neo Tilted.

Slurpy Swamp is located at the southwestern part of the map, south of Weeping Woods, northwest of Misty Meadows and southeast of Holly Hedges. It is a swamp, similar to Moisty Mire, with a Slurp Juice factory.

Misty Meadows is located at the southern part of the map, southwest of Lazy Lake and southeast of Slurpy Swamp. It is a small village, and it's design is similar to Happy Hamlet.

Dirty Docks is located at the eastern part of the map, south of Steamy Stacks east of Frenzy Farm and north of The Grotto. It is a cargo dock with cranes, many motorboats, and warehouses similar to Dusty Depot.

Frenzy Farm is located at the northeastern part of the map, south of Craggy Cliffs and west of Dirty Docks. It is a large farm with many fields, similar to Anarchy Acres and Fatal Fields.

Pleasant Park is located at the northwestern part of the map north of Salty Springs and northeast of Sweaty Sands. It is a suburban residential neighborhood with houses and an open soccer field.

Sweaty Sands is a location southwest of Pleasant Park, northwest of Salty Springs, and north of Holly Hedges. It is a residential area along the beach, including SoFDeeZ and the hotel similar to the one that was at Paradise Palms.

Steamy Stacks is located at the northeastern part of the map, east of Craggy Cliffs and north of Dirty Docks. Similar to Pressure Plant, it is a power plant, this one powered by the CUBE and run by a company called Kevolution Energy.

Weeping Woods is located east of Holly Hedges, north of Slurpy Swamp and south of Salty Springs. It is a large woods, containing multiple cabins, similar to Wailing Woods and Lonely Lodge.

Holly Hedges is in the west portion of the map, west of Weeping Woods and northwest of Slurpy Swamp. It is a town that highly resembles Greasy Grove, with houses that are very similar to Starry Suburbs.

Retail Row is located at the eastern part of the map. It is a retail store complex with a wide parking lot and a residential neighborhood beside the commercial area that consists of houses, some of which are broken or damaged.

The Agency is located at the central part of the map, east of Salty Springs and southwest of Frenzy Farm, on the former landmark Eye Land. It is an agency building guarded by multiple GHOST Henchmen and the Midas skin.

The Shark is located at the far northwestern part of the map. It is a large mansion built on top of a cove that is in the shape of a shark. The location is guarded by multiple Henchmen along with the Skye skin.

The Yacht is located at the far northeastern part of the map, northeast of Steamy Stacks. It is a large boat that is guarded by multiple Ghost Henchmen along with the Deadpool skin.

The Rig is located at the far southwestern part of the map, southwest of Slurpy Swamp. It is a large oil rig built over the water, guarded by multiple Henchmen along with the TNTina skin.

The Grotto is located at eastern part of the map, located in between Retail Row and Dirty Docks. It is a large base built underground, guarded by Shadow Henchmen along with the Brutus skin.

Landmarks are small POI's that are not labelled on the map, but their name usually appears when the player visits them. Small notable locations, like a pond, bunker, small settlement or natural/man-made feature are usually designated as a Landmark. (In some cases, e.g. "Snow Cone Food Truck", the name is not displayed and the game just displays the word "Landmark" with no associated landmark name, although this may be a bug.) Discovering new landmarks grants experience. Visiting 10 of them is required in order to complete a mission objective of the New World Missions ("Discover Landmarks"). Many, though not all, of the landmarks are associated with grey areas of the map and the landmark must be visited to clear the grey area.

The following coordinates are considered as dead grids that are mostly unexplorable and covered with water, though may have also small amounts of land in them: A1, H1, A7, A8, B8 and C8.

Map markers are icons that players can place on the map. It is mainly used to mark a place that players will lands at, go toward, etc. There are blue, purple, red, and yellow markers depending on what the color your character is represented with.