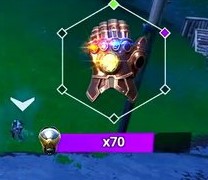 the infinity stones on the gaunlet

The Infinity stones are mythic items in the Endgame ltm.

. Each stone also had a different effect on Thanos' abilities:

Each stone collected also increased the Chitauri's health and shield maximum. The first soldier to collect a stone was turned into Thanos.