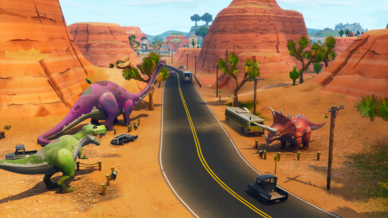 A museum of dinosaurs

I9 was a coordinate grid area of the Battle Royale Map located at the south west of the map.

On Season 4, I9 was formerly swamp part of south west central of Moisty Mire which was eventually converted into a large production set with green screens, props and stages. in Season 5 it was replaced with a rock plateau spots covered in desert biome and the Junkyard (POI).

I9 was added to the map as a grid coordinate