Horde Bash was an event in Save the World that was released in Patch 1.7. It featured the debut of the Challenge the Horde mission type, two new Defenders, and the Scavenger Heroes and Weapons sets.

Scavenger Tickets while playing during the Horde Bash event. They were used to purchase Scavenger Llamas at the price of 1000 tickets per Llama.

Scavenger Heroes were available from Scavenger Llamas during the Horde Bash event. 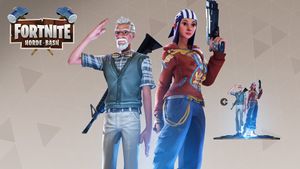 Horde Bash added two new defenders, the Female Shotgunner and Male Sniper to the regular llama reward pool. They became available during the event and continued to be obtainable after the event ended, dropping from any regular llama that can contain defenders.