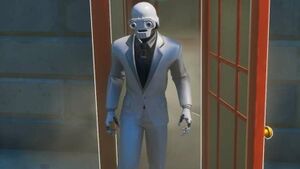 A player disguised as a Ghost henchman, stepping from a phone booth.

Henchmen are non-player characters that function like Stormtroopers and Marauders. They were added in Chapter 2 Season 2, and can be found at the new POIs. Henchmen always have full health & shield which can make them difficult in groups. If players use the "Shakedown" feature on a Henchman, it will show locations of nearby features such as chests, other henchmen, and bosses (eg. Jules). It is possible to disguise as a henchman with using Phone Booths. This makes the AI henchmen ignore the player, unless the player shoots a weapon at a henchmen or a player, gets too close, or get shot by an opponent.

GHOST Henchmen are types of Henchmen that work for an organization called Ghost. They always wear white suits, as well as a protective helmet. In Chapter 2 Season 3, they now wear shorts. They usually carry suppressed weapons, but will also carry an Uncommon Pistol if they hold an Epic Suppressed Sniper Rifle. These Henchmen can be found at The Fortilla.

The Ghost Henchmen can carry the following weapons.

The GHOST Henchmen Chests can contain the following weapons.

SHADOW Henchmen are similar types of Henchmen that work for Shadow. They wear black suits, and covering masks. In Chapter 2 Season 3, they now wear shorts. They usually carry heavy weapons along with the Rapid Fire SMG. If they are holding a Epic Heavy Sniper Rifle, they will also carry an Uncommon Pistol as well. These Henchmen can be found at The Authority. During Chapter 2 Season 2, Shadow Safe Houses were the main locations for Shadow. As the season progressed, The Grotto, The Rig and The Agency became locations for Shadow. However, all the safe houses were flooded or returned to normal before being taken over, and all the Spy Locations were either flooded or destroyed. The Agency was taken over before shortly turning into The Authority.

The old Rig henchmen were based on the Turk Vs Riptide outfit.

The old Shark henchmen were based on the Heist outfit.

The old Grotto henchmen were based on the Sledge outfit.

The Catty Corner henchmen are based on the Kitbash outfit.

At every new named location that had Henchmen, they also had a Boss, a similar type of Henchmen that represents a skin from the Battle Pass. Six out of the eight Battle Pass outfits from Chapter 2 Season 2 appeared at five locations while three out of seven Battle Pass outfits from Chapter 2 Season 3 appear at three locations. They have 400 shields and 100 health, unlike normal henchmen with 50 shields and 100 health.

Jules, the Level 40 Battle pass skin of Chapter 2 Season 3, appears at The Authority. She wears her default look. Since The Authority is very similar to The Agency, Jules appeared around in the same places Midas would: on the bottom floor, on the staircase, in the second or fourth floor hallway, or in the meeting room. As Jules roams around, she holds her weapon, called Jules' Drum Gun, along with Jules' Glider Gun and the keycard to the vault. Jules' Glider Gun works similarly to the Batman Grapnel Gun, allowing players to grapple in the direction shot and activate the Ohm glider.

Ocean, the Level 1 Battle pass skin of Chapter 2 Season 3, appears at The Fortilla. She wears her styles, every match is different. Ocean appears at any of the large structures around the sides of The Fortilla or in the center building. As Ocean roams around, she holds her weapon, called Ocean's Burst Assault Rifle, a type of Burst Assault Rifle that has a larger magazine and does slightly more damage. Along with the rifle, she drops Ocean's Chug Jug, an infinite, rechargeable use healing item, and her keycard to the vault.

Kit, the Level 60 Battle pass skin of Chapter 2 Season 3, appears at Catty Corner. He is in his default look. Since Catty Corner is an extension of the Box Factory where Meowscles used to be, Kit appears around where he would: inside or around the factory, or in a new nearby gas station. As Kit roams around, he holds his weapon, called Kit's Charge Shotgun, a type of Charge Shotgun that has more shots in it before having to reload. Along with the shotgun, he drops Kit's Shockwave Launcher, a type of Grenade Launchers that, instead, shoots Shockwave Grenades, and his keycard to the vault.

Midas, the Level 100 Battle Pass skin of Chapter 2 Season 2, appeared at The Agency. Midas as a bot was in the Ghost style before changing to his Shadow look at the end of the season. He usually appeared on either the bottom floor of the building, one of the staircases up the building, one of the halls in the building, or in the group meeting room. As Midas roamed around, he helds his weapon, called Midas' Drum Gun. Midas' Drum Gun was dropped when he was defeated as well as his keycard to open the vault. The Drum Gun was fully gold when he and any other players held it, following the skin's rule, that when the skin touches a weapon, it remains gold throughout the match. His gun might have occasionally have the effects of a player's wrap, but it was only a bug. After the introduction to Chapter 2 Season 3, Midas no longer appears anywhere. 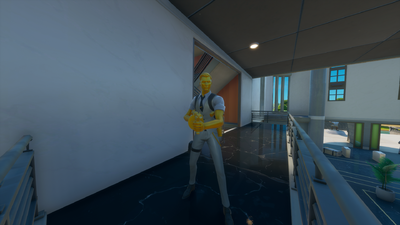 Midas before The Device Event

Skye, the Level 80 Battle Pass skin of Chapter 2 Season 2, appeared at The Shark. She used to be in her default look, but when the location became a Ghost location, she changed to her Ghost style. She would usually appear around the main floor, or a floor above the vault floor if not in the vault hall. Since The Shark changed its layout, her positioning became slightly different. As Skye roamed around, she held her weapon, called Skye's Assault Rifle. Skye's Assault Rifle was dropped when she was defeated as well as her keycard to open the vault and Skye's Grappler, an infinite shot Grappler. The Assault Rifle shot faster than the regular ones, and dealt slightly more damage than a Legendary one. 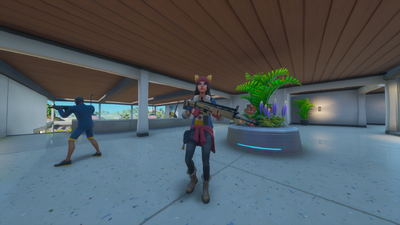 Meowscles, the Level 60 Battle Pass skin of Chapter 2 Season 2, appeared originally at The Yacht, but eventually moved to the Box Factory. He was in his Shadow style, originally Ghost style. As Meowscles roamed around, he held his weapon, called Meowscles' Peow Peow Rifle. Meowscles' Peow Peow Rifle was dropped when he was defeated, along with, interestingly, the keycard to open The Yacht vault, and a Fishing Rod. The Heavy Assault Rifle was similar to the other heavy rifles besides, it doing slightly more damage than a Legendary one. Interestingly, Meowscles could emote, and occasionally used the Waterworks emote when he wasn't disturbed.

TNTina, the Level 40 Battle Pass skin of Chapter 2 Season 2, appeared at The Rig. She used to be in her default look, but when the location became a Shadow location, she changed to her Shadow style. She would usually appear around the center tower, or the northwest part of The Rig, but began appearing at land around The Rig. As TNTina roamed around, she held her weapon, called TNTina's Ka-Boom Bow, a type of Boom Bow that had recharged shots like the Bandage Bazooka. The Boom Bow did 75 damage to opponents, 100 if it was a direct hit. TNTina's Ka-Boom Bow was dropped when she was defeated as well as her keycard to open the vault. 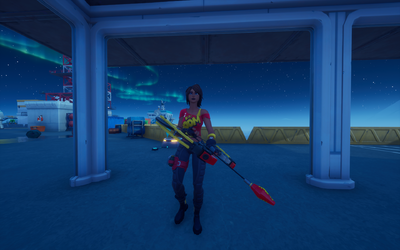 Brutus, the Level 20 Battle Pass skin of Chapter 2 Season 2, appeared at The Grotto. He used to be in his default look, but when the location became a Shadow location, he changed to his Shadow style as well. He usually appeared around the second floor of the large building in The Grotto. As Brutus roamed around, he held his weapon, called Brutus' Minigun, a Minigun that had the same stats as a Legendary one, but with a longer firing time and faster cooldown. Brutus' Minigun was dropped when he was defeated as well as his keycard to open the vault.

Deadpool, the "secret" Battle pass skin of Chapter 2 Season 2, had appeared on the map during Week 7. He replaced Meowscles at The Yacht, usually appearing the similar locations that Meowscles would appear: in the main control room, in the dance area, or at the bedroom of The Yacht. As Deadpool roamed around, he held his weapon, called Deadpool's Hand Cannons, a type of Dual Pistols that were weak Hand Cannons but gave 3 effective health when dealing damage. Deadpool's Hand Cannons were dropped when he was defeated as well as his keycard to open the vault in The Yacht. Interestingly, Deadpool could emote, and occasionally did emotes like Statuesque, Make It Rain, or Dance Moves if not disturbed.