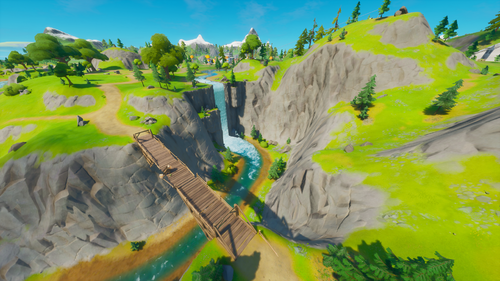 Gorgeous Gorge is a Landmark in Battle Royale added in Chapter 2 Season 1, located inside the coordinate B6, between Lazy Lake and The Agency , and was close to E.G.O. Barracks before it was removed. It is a tall waterfall, that leads to a current. There is an outcrop on the side of the cliff, and a small tent near the base of the waterfall. At the top of the waterfall, there is a No Swimming sign and a Zipline that leads to a small campsite on a nearby hill. Above the current, there is a mildly damaged wooden bridge with a small wooden cart hanging off the side.

There is a chest on an outcrop on the side of the cliff, two chests are present on the bridge, and one chest sits at a small campsite near the base of the waterfall.

As of around Patch 11.10, a grave, flowers and a chest appeared at the base of the waterfall, likely in memorial to this Reddit post.