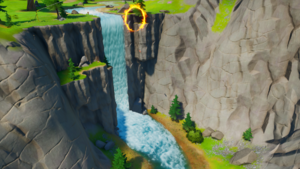 A player diving off of Gorgeous Gorge.

Gorgeous Gorge is a Landmark on the Battle Royale Map. It is located at the grid coordinate E5, between Lazy Lake and Eye Land, and was close to E.G.O Barracks before it was removed. It is a tall waterfall, that leads to a current. There is an outcrop on the side of the cliff, and a small tent near the base of the waterfall. At the top of the waterfall, there is a No Swimming sign and a Zipline that leads to a small campsite on a nearby hill. Above the current, there is a mildly damaged wooden bridge with a small wooden cart hanging off the side.

There is a chest on an outcrop on the side of the cliff, two chests are present on the bridge, and one chest sits at a small campsite near the base of the waterfall.

As of around Patch 11.10, a grave, flowers and a chest appeared at the base of the waterfall, likely in memorial to this Reddit post.