From Fortnite Wiki
(Redirected from Fort)
Jump to: navigation, search

Building is one of the main gameplay elements of Fortnite. It consists of building, upgrading (only applies to Save the World), and repairing basic structures such as walls, floors, stairs, and roofs, as well as placement of traps, to create a functional defensive Fort. Creating structures requires basic building Materials, which are mamz Wood, Stone, and Metal. These resources can be obtained through harvesting or destroying objects in both game modes. They can also be obtained by killing another player.

Building is done by using the build menu. Within the Build menu, a holographic image of the structure to be built will be projected in front of the character to indicate where it will be placed. Materials can be switched by using Mouse Right Click, and the shape can be also modified of the desired structure by pressing G.

When a new structure is placed or an existing one is modified, it starts out with about half of its full health and take a few seconds to fully form. It cannot easily block off enemies by placing walls, as newly placed structures do not instantly form with full health. Every basic structure of any shape costs 10 Wood, Stone, or Metal to build. Constructors only have to use 9 Wood, Stone, or Metal to build. Build time is based on HP per second, so wood builds the quickest since it has the fewest HP while metal builds the slowest since it has the most HP.

If the materials run out while building, it'll now automatically switch to the next material with available resources. This can be turned off with the “Auto Material Change” option in the Game Settings menu.[1] Buildings that are not connected to another building or the world geometry will automatically collapse, which could lead to a chain reaction that destroys a majority of the base. This includes edited buildings that also meet said criteria. 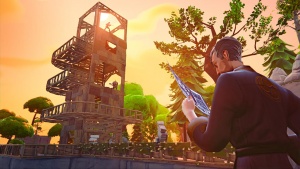 Building in Save the World 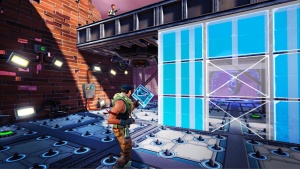 Editing buildings in Save the World

In Save the World, building is accessible at any time by any Class during missions through default hotkeys Q or one of the F keys from F1 to F5. Build cost, structure HP and build speed can be improved with skills, squad bonuses, and by playing certain Constructors.

World Resources, often called "mats" or "materials" by players, are used to build structures. Harvesting items and objects with a Pickaxe yields a different amount of World Resources, depending on the object that was destroyed.

As you progress through the game, you need to be aware of what enemies are within the map and build accordingly, for example:[2]

You can upgrade structures by pressing F when they are at full health, consuming extra resources in the process. Upgraded structures have significantly higher Health, which means it can withstand more damage before being destroyed.

Base structure upgrade costs to level 2 and 3 are 20 and 30 resources respectively, but these can be decreased by stats and squad bonuses.

Each material costs the same amount of resources to build and upgrade.

Structures that have taken damage from Enemies can be Repaired at any time by pressing F. Repairing structures consume resources depending on the structure's type (e.g. Wooden walls can be repaired using Wood). As with building and modifying, the process of repairing a structure takes a few seconds to complete. The more damage a structure has taken the more it costs to repair, up to the actual build cost.

If a structure takes enough damage to be destroyed, it cannot be repaired, and must be rebuilt from scratch, requiring more resources.

Traps are various items which can be placed on floors, stairs, walls, ceilings or roofs to provide more defense or utility to a fort. These include damage traps, healing traps, and (player or enemy) movement traps. Traps can be placed by pressing default T or F5.

Each of the configurations have different amount of health points. Generally speaking the more blocks it uses within the building, the higher health it will be. The table below is able to be sorted by clicking on the headings.

Defense Health indicate how much health a defense have sorted by level, material and type.[3]

Health / Cost shows how "efficient" you are in terms of getting health per resource spent.

Newly-placed building pieces appear in a different color while players are still overlapping the structure.