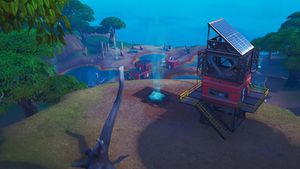 An expedition outpost at the Hot Springs (POI)

The Expedition Outposts were a series of unnamed POIs that could be found scattered across the Chapter 1 map. Typically, these outposts consisted of red metal bunkers and labs that ranged in size. However, smaller shacks, garages, and large hangars could be found as well. The main headquarters for Expedition were located at Frosty Flights and featured two large hangars along with large labs and offices. Most Expedition Outposts had Ziplines leading to and away from them, and served as spawn locations for Ballers and Driftboards. Varying amounts of chests could also be found per Outpost.

Expedition Outposts are similar to the E.G.O Outposts