From Fortnite Wiki
(Redirected from Enemies)
Jump to: navigation, search

Zombies are the primary antagonists in Save the World. They have a variety of different behavior patterns, but their main actions are damaging players, buildings, and mission objectives. They spawn from The Storm or can be found sleeping around the map during missions. When sleeping, they will be awoken if the player approaches them, attempts to loot nearby materials, or attacks them or other nearby monsters. When going into harder Power Level missions, monsters can become elemental. If they are fire, weapons with a water will be more powerful than ones with the nature element. However, weapons with energy damage will deal neutral damage against all elements, even energy!

There are two primary types of monsters that spawn during siege/defense missions: Husk Monsters and Mist Monsters.

Husk Monsters
Husks make up the majority of the enemies encountered in Save the World. They deal low to moderate damage and have low to moderate amounts of health. They come in ten different varieties with different appearances and attack patterns: Husk, Husky, Pitcher, 'Sploder, Beehive, Lobber, Huskling, Riot Shielder, Zapper and The Healer.

Mist zombies
Mist Monsters are rarer than Husks and tend to have higher health and deal higher damage. They have more varied appearances and attack patterns than regular Husks. Mist Monsters don't attack the objective directly, but instead focus on allowing other Enemies to do so. They come in four varieties: Smashers, Takers, Blasters, and Flingers.

There are a few other monsters that do not follow the typical siege behavior and spawn mechanics of Husks and Mist Monsters.

Trolls
Small, harmless Mist Monsters that appear during the Whack-a-Troll minigame. They do not damage the player directly, but occasionally they will spawn a Troll-colored bomb during the minigame, which will damage the player. They also occasionally appear in buildings as if they were ghosts. These cannot be interacted with but are mostly there for appearance.
Mimics
Fortnite's take on the classic "mimic" trope, Mimics take on the appearance of blue level 3 Treasure Chests. They are dangerous, having high health and dealing high damage, but killing them grants rewards for the whole team.
Shielders
Small purple ghost-like monsters that tag along above some Husks and Mist Monsters to partially shield them from damage. Shielded monsters take significantly reduced damage, but the shield can be removed by killing the Shielder attached to them.
Super Shielders
Larger versions of regular Shielders that act similar to them, floating above some Husks and Mist Monsters to shield them from damage. The biggest difference however, is that the Super Shielder creates a big ball-shaped shield allowing anything inside of the circle to be shielded from damage, along with the Super Shielder itself. The shield can be shot down, or a player can enter the shield to kill anything inside it without penalty.

This is a boss which Inhabits the cube inside it, The boss Was released in 7.0 and was in production for more than a year, its attacks are summoning husks, lazer mouth, and picking up giant rocks and throwing them. Fortnite has confirmed that if you beat the boss by January 1st, 2019, you get a Storm king pin Sent to you.

This Husk appears at the end of Canny Valley Act 1 in the mission "Gravestone". He's Similar to the Zapper husks, but looks darker and has Red eyes.

This husk is a Vampire version of the normal Taker enemy. Each attack heals him and damages you. Can only be found in Hexsylvania limited time missions

This Husk is a Chrome version of the normal Husky enemy. If not taken out with a Fire Weapon it will get back up after being killed once. This husk was found in all missions with mini-bosses during the Blockbuster Event (Patch 4.0)

This husk can only appear in Mutant Storm Missions. Killing him rewards players with 100 gold. 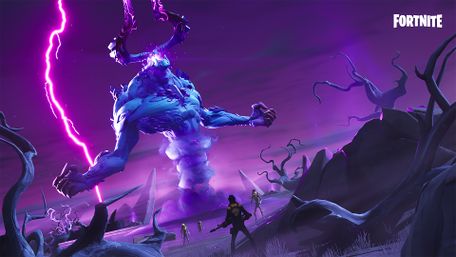