Downed But Not Out

From Fortnite Wiki
(Redirected from DBNO)
Jump to: navigation, search 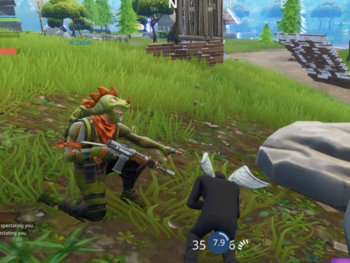 DBNO or Downed But Not Out (commonly referred as knocked down or knockout or downed) is an intermediate near-elimination status that a player can enter during a team match of Battle Royale when they run out of health. It provides a chance for allies to revive them.

When a player is knocked down, they will slump to the ground and will be unable to use any weapons or items, and their movement will be severely limited to a slow crawl. A red "tenacity" gauge will replace the now-empty health and shield bar, indicating how long the player can hold out when in a downed state before they give out and are eliminated. A downed player begins with 100 tenacity points, which continuously decreases for each second they spends in this state, as long as a teammate is not attempting to revive them. Tenacity will also be lost in the same way as health and shield if the downed player is attacked with weapons or suffers other harm, allowing a player to finish a knocked-out player, although downed players will generally have smaller collision detection. In early versions, DBNO players lose 1 tenacity point per second, until an update changed this so that players lose 2 tenacity points every 2 seconds. The 6.20 update generally doubles the rate at which tenacity is lost (2 tenacity points lost per second), before version 6.30 slowed the tenacity loss such that a player's tenacity would fully deplete after a minute without outside intervention (2 tenacity points lost every 1.2 seconds). It was not possible for DBNO players to recover tenacity, but the addition of the Chug Splash made it possible to do so by being splashed by one that was tossed.

When a fellow teammate is knocked down, a distress call will sound and the downed teammate's indicator on both the map and onscreen will change to a cross to indicate that they needs to be revived, allowing allies to easily locate them. If a fellow teammate is knocked down, their mini-HUD will also show a tenacity bar indicated at the upper left corner of the screen. To revive a downed ally, the player must stand next to them, aim the focusing reticle at them and hold down the action button to attempt a revive. In order for the attempt to be successful, the action button must be held down for ten seconds, and no further damage can be taken. If all teammates are knocked down, then the entire team is eliminated.

If a player successfully knocks down an opponent, the display name of the opponent being KO'd will briefly appear above the health and shield bar in yellow. If that player is finished off, or gives out, the player credited with the knockout will also be credited with the elimination as well.