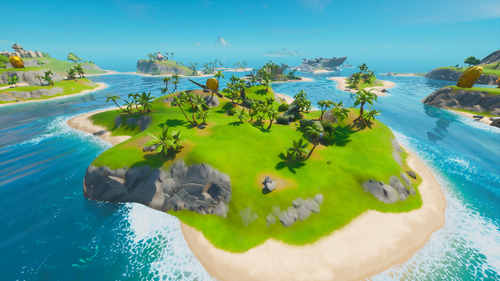 Crash Site was a Landmark in Battle Royale added in Chapter 2 Season 1, located inside the coordinates B2 and C2, and was close to Coral Cove, and the Sweaty Sands. Other than the crash site and natural features, the island was empty. It was a small island with a large, green, crashed E.G.O. cargo plane, possibly based on a hybrid of an L-100 Hercules and a C-141 Starlifter. The plane has been split into many pieces on impact, with considerable damage to the ground below. The only remaining cargo were some black crates, long green containers, a dartboard, oxygen tanks, a net, some servers, monitor screens, chairs and wall lockers. Whatever valuable items the Crash Site held were likely either destroyed or salvaged by the E.G.O. and taken to a nearby outpost. 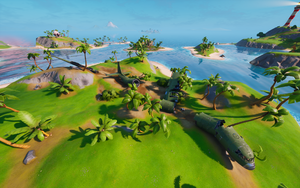