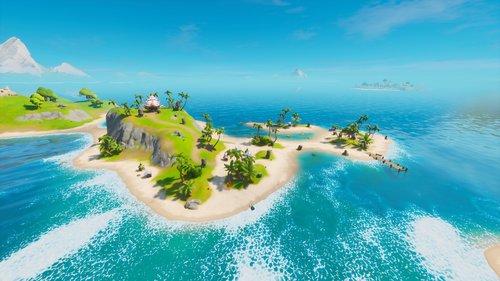 Coral Cove is a Landmark in Battle Royale added in Chapter 2 Season 1, located inside the coordinates A2 and B2, on a set of small islands, and is close to the Crash Site, and Fort Crumpet. It is a primitive village filled with various huts and shacks, all with leaves or seashells as roofing. Stone sculptures resembling Fishstick, each bearing different expressions, can be found decorating the landscape, and tiki torches and random oversized seashells are present. The small singing coral-like creatures found on the Coral Cruiser glider can be found on a few rocks, singing the Coral Chorus. You can find them at the large shack at the top of a hill, and just above water in the center of the village, and on the far north. Small corals are found in many places, including on the stone sculptures.

Chests can be found in a few of the seashell huts, and in the large shack.