The new updated map shows more than a half of the upper side of the island being severely flooded during the first few weeks. But with new seasons, comes new mechanics, POIs, and new weapons. There are new bosses with new Mythic weapons to find in-game.

Over the course of Season 3, the water level had started to recede until Week 7 of the season.

The Battle Pass Tab now features a fortilla instead of a spy-base.

On April 29th, a group of posters were leaked in the game files labeled as teasers. These posters can be seen on a building owned by No Sweat Insurance in Lazy Lake, which all 3 posters are placed around the building multiple times. The following teasers below are the full posters that can be found in the game files:

On June 1st, Sony/PlayStation accidentally leaked the pre-cover for Season 3. (This has been done before by them every other season.) It shows the Battle Bus over the ocean and a three palm tree island in the background:

On June 15th, shortly after The Device Event, Fortnite posted a main teaser for Season 3, and will most likely post more until Season 3 However, a second teaser was seemingly accidentally sent out to creators who leaked the second teaser:

The Battle Pass for Season 3 costs 950 V-Bucks, and is a way to earn exclusive rewards during the season by earning XP and increasing your level. The rewards included in the Battle Pass include: Outfits, Gliders, Wraps, Harvesting Tools, Back Blings, Emotes, Sprays, Contrails, Music, Loading Screens and more.

With Chapter 2 Season 3, Weekly Challenges became available within every week of the season. The challenges, as it says, are unlocked around every week. By completing them, large amounts of XP are rewarded, and the more challenges that are completed, the more requirements can be met to unlock other styles for Battle Pass outfits. All Weekly Challenges are available until the season ends.

Similar to Chapter 2 Season 2, challenges still exist in the Battle Pass tab, changed from a spy headquarters to a personal fortilla. Most of the challenges, besides style challenges, are still available through the challenge table, labelled Map Challenges. When a challenge must be completed, the hologram on the Challenge Table will hold the information. When a location is listed to a specific location, a number will be placed at that location based on how many challenges are required to be completed there. Challenges also include unique icons, such as a chest, explosion, exclamation point, and multiple others. When areas on the map are gray or labeled as ???, it means that there are a new locations there or the old locations have changed significantly.

Various thematic sets including Cosmetic Skins, Harvesting Tools, Emotes and Gliders are also to be released during Chapter 2 Season 3 as part of the item shop components on daily rotation basis and Battle Pass rewards.

Illumination = Elimination, find out what you can do with our new jar of fun.

We've added some flare to your arsenal with this hot new weapon.

Driving arrives in Fortnite! Fuel up at the new gas stations and master each car's unique handling. 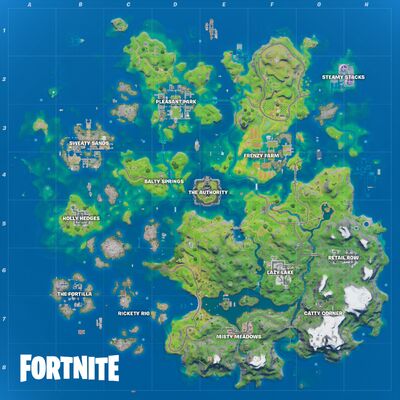