From Fortnite Wiki
(Redirected from Cattus)
Jump to: navigation, search 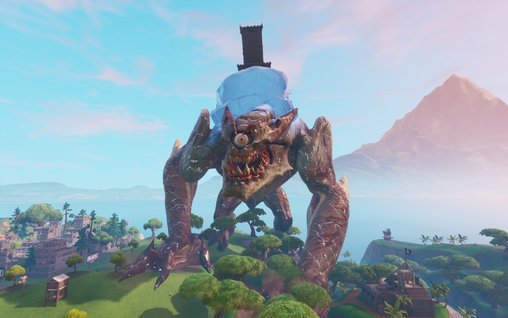 The Devourer, usually referred as the Polar Peak Monster or Cattus, was a giant and powerful monster in Battle Royale that roamed around the ocean surrounding the map during most of Season 9. It was a giant, one-eyed sea creature with huge arms and feet that carried Polar Peak's castle around on it's spiky back until the Mecha destroyed it. It was considered the main antagonist of Season 9.

The Devourer was defeated during The Final Showdown Event by the Mecha, stabbing it’s head with the sword in Neo Tilted.

It seems as if the monster was trapped inside of Polar Peak's iceberg for many years, before being woken up by a volcanic strike from the Volcano during Season 8's Unvaulting Event.

During the first few weeks of Season 9, Polar Peak's Bottom began to crack and rumble very often; almost as if something was trying to escape. Just days later, the monster's giant eye was spotted in Polar Peak that stared at any nearby players and made odd noises. 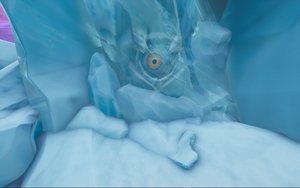 After the 9.20 Update, the Devourer escaped to the sea, bringing Polar Peak's castle with it and leaving a few footprints behind. Shortly after, the monster was spotted swimming in the sea, though only the Polar Peak Castle on it's back was seen. It eventually began to attack a few locations on the map (Snobby Shores, Pleasant Park and Loot Lake). The beast was also seen swimming in the ocean fast and more frequently.

The Devourer's first, and currently only, public appearance was during The Final Showdown Event that happened on July 20th of 2019. It had many more powers then anyone thought, and began to cause havoc on the island. It carried most of its attention towards the vault, as if drawn to the power source used by Mecha. Fortunately, the Devourer was stopped and killed by Mecha and stood as a Unnamed POI until the end of Season X.

Though being quite big, bulky and having a small tail, the Devourer is seen to be capable of moving and swimming at quite high speeds, and being capable of jumping very high.

The Devourer is also able to fire giant green lasers from its mouth with intense destructive capabilities. 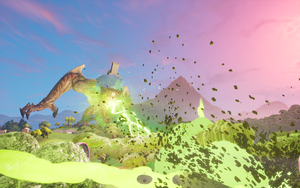 Additionally, it is also incredibly strong - being able to destroy or crush several buildings with one stomp or swipe and can survive several blows from even other strong entities, such as Mecha's Missile Barrage shown in the The Final Showdown Event.