From Fortnite Wiki
(Redirected from C2)
Jump to: navigation, search 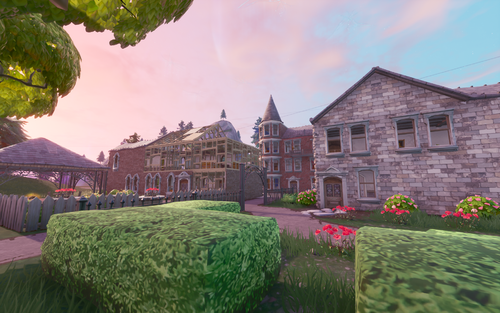 Starry Suburbswas a named Point Of Interest in Battle Royale which was added to the Map in Season X/10, located inside the coordinate C2, north of Pleasant Park, southwest of The Block and southeast of Junk Junction. It was a small village with 4 houses and a large mansion.

Just like the other rift zones, a giant bubble surrounded Starry Suburbs. Stars occasionally fell from the sky inside this bubble, and could be used to get a free item.

For more detail on buildings and houses, visit Starry Suburbs/Buildings.

A large mansion with 4 stories including an attic.

A small blue house with a basement accessed from the outside.

A house that was under construction it had a large backyard with a outdoor covered sitting area.

Two white houses could be found in the location both have two floors were roughly the same size, although one had a back yard with a fountain.