Chapter 2 Season 2 is the second season of Chapter 2, and the twelfth season of the game Fortnite Battle Royale. It is a 100-level battle pass containing over 100 cosmetic items, which is 950 V-Bucks, or 2800 V-Bucks if the Battle Bundle is bought, rewarding the first 25 levels. 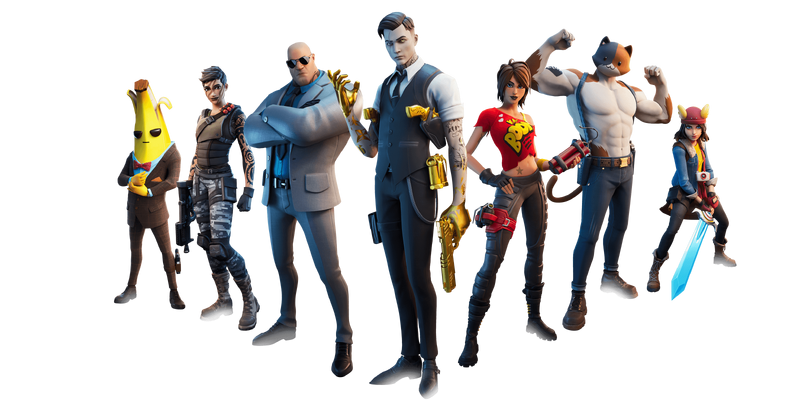 Six out of seven skins included in the Battle Pass have a selectable style that transforms them into solid gold, known as "Golden Agent". This includes the following skins:

The remaining outfit, Legendary Gear Specialist Maya, is the first outfit able to be fully customized, with 3.8 million different combinations. The skin is the introduction to "Forged" outfits.

Similar to last season, the leveling system allows you to reach beyond tier 100, with additional 'golden' styles for the Battle Pass skins being rewarded for reaching a certain amount past 100. 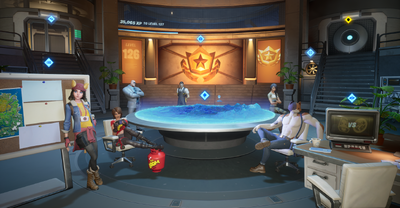 In Chapter 2 Season 2, the Battle Pass tab has been changed into a large, interactive menu with multiple sublocations, including the Battle Pass rewards and Challenges. The location can be called HQ, a location for most of the Battle Pass skins to hang around at during all of the season. Also included in this area is Deadpool's hideout, which can be accessed through the vents.

The Daily Assignment section is a board that is simply for Daily Challenges. Daily Challenges are challenges that are rewarded every day. Up to three challenges can be held, and a challenge can also be replaced once a day with another challenge. Daily Challenges mostly consist of simple tasks such as searching chests or ammo boxes in a specific location or harvesting a certain amount of material.

On March 31 (Patch 12.30), the images of random weapons on the Daily Assignment Board were taken down, and instead, an image of bear and a gnome appeared along with an image of a basement hatch. It is the hatch of the northwest cabin of Weeping Woods, which when a player enters is actually a secret hideout for a group of toy bears holding a gnome in a cell. Usually when players would enter the area, nothing would occur. Past March 31, players can now enter the area, which would complete a secret challenge: Finding the Ted Offensive Plans.

Once the Ted Offensive Plans are found, the second image on the Daily Assignment Board would be replaced with the image of the Bears in the hideout, where the plans are found. Five new images would also be put up, and pins would connect each picture to a point of the Battle Royale Map on the board. These are actually locations where Honey can be found and interacted with. The locations are north of Pleasant Park, The Orchard, southwest of the Green Steel Bridge, northeast of the Ghost House, and in between Sweaty Sands and Holly Hedges, all under tree locations. The locations can be indicated with the sound of bees. The Honey also slowly heals 10 health or shield. 40,000XP will be rewarded for completing the challenge.

Once the Ted Offensive Plans are found, another challenge will be available, however won't be shown on the Daily Assignment Board. Once the other two challenges are complete, all the images will be removed from the board, leaving just the map and the Daily Challenges section. Outside the cabin where the secret bear hideout is, five gnome outposts have appeared that players can locate. These locations are generally in a circle around the cabin, two of them being across the nearby river. The locations can also be indicated with the sound of bees. Players must interact with five telescopes to aim them to the cabin to complete the challenge. 40,000XP will also be rewarded for this challenge. These challenges suggest a battle will soon begin or happen, the gnomes goal most likely to free the trapped gnome in the cabin.

On April 15th (Patch 12.40), the Bears Vs Gnomes story continued further. Back at the cabin, the gnomes have attacked, and have blown their way into the cabin. However one gnome was seemingly defeated from breaking in, the others have successfully captured the bears and saved their trapped gnome. Unfortunately, the first few challenges before the update are now over, the telescopes and honey around the map vanishing. However, a new challenge has appeared, and can be completed by reentering the cabin and interacting with a seemingly defeated bear in the cage. Once done, all the bears will vanish from the cabin, liberating the bears. 15,000XP.

On April 29th (Patch 12.50), the Bears Vs Gnomes story continued even further. Most of the gnomes have left the cabin they took over, and have begun to prepare for battle to the northeast of Weeping Woods with a large group of bears. Similar to the first set of challenges, the challenge to free the bears is no longer available, but however a new challenge is available. If a player visits in game, the player can interact with both sides, disarming them both. Upon completion, all the of the weapons vanish, and the player is rewarded with 15,000XP and an Achievement, No Right to Bear Arms.

On May 20th (Patch 12.60), the Bears Vs Gnomes story seems to have finished, ending with all the gnomes and bears making a truce over a few drinks and a new set of notes to follow. Any past challenges are no longer available, as the bears have moved position and are no longer in the same situation. However, seemingly one last challenge has become available. If a player visits in game, the player can emote in front of the group. Upon completion, the player is rewarded with 15,000XP and another Achievement, Gnome More War.

The Agents section is a section where five out of the seven Battle Pass skins are introduced to their own style room in the HQ. This is also where the choice for the skins to change to either Ghost or Shadow is given. Based on which style is chosen the most, it can deal a massive effect to the Battle Royale Map. For example, most players chose the Shadow style for TNTina, which led to The Rig being badly damaged and now taken over by Shadow.

Five out of seven skins included in the Battle Pass have two styles that are able to be permanently selected between; Shadow and Ghost. This includes the following skins: 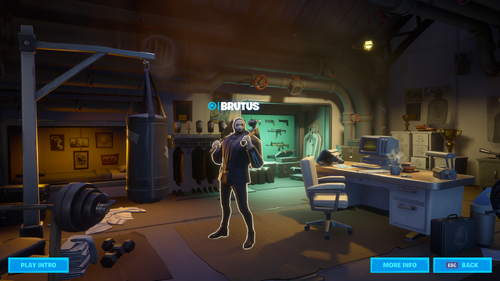 Brutus' room was the first room to open up during Chapter 2 Season 2, on the first day. The intro to Brutus' room shows Brutus entering his room, placing down a suitcase featuring his skull symbol, sitting down in front of a desk, placing his hammer on the desk, and begins typing, finishing off with throwing his cleaver at the target placed on the door. There are three objects in the room that can be interacted with: 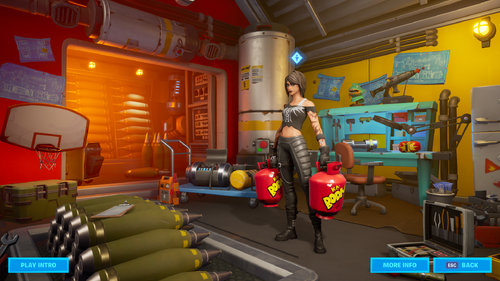 TNTina's room was the second room to open up during Chapter 2 Season 2, on the third week. The intro to TNTina's room shows TNTina juggling grenades. She tosses the three grenades into a chest behind her, pulling the pin for each one every throw. It finishes with TNTina kicking off the desk she's at and knocking the chest closed with her feet, blowing the inside of the chest for the end. There are three objects that can be interacted with: 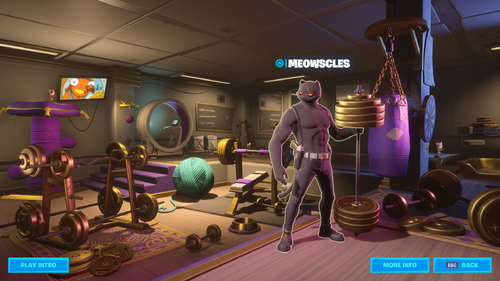 Meowscles' room was the third room to open up during Chapter 2 Season 2, on the fifth week. The intro to Meowscles' room shows Meowscles working out with multiple weights, a treadmill. Instead of finishing on the bench press, it finishes with Meowscles leaving the litter box. There are four objects to interact with: 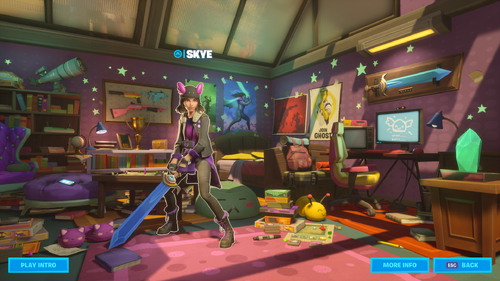 Skye's room was the fourth room to open up during Chapter 2 Season 2, on the seventh week. The intro Skye's room shows Meowscles and Skye playing with a tower of blocks. With a little help from Ollie, Skye wins the game, and takes a picture of Meowscles throwing the table in rage. There are three objects to interact with: 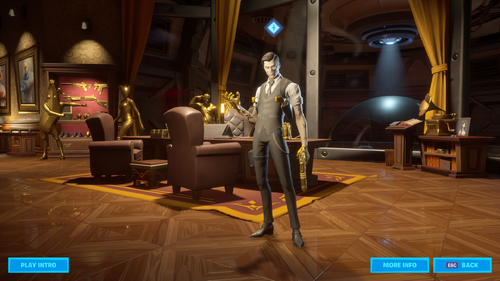 Midas' room was the fifth and final room to open up, on the ninth week. The intro to Midas' room shows Midas walking into his room holding the helmet to the Black Knight. Midas uses his golden touch to turn it to gold, and place it with his collection of golden heads and helmets, featuring Lynx, Burnout, Aeronaut, Battle Hound, A.I.M., Big Chuggus, Astro Assassin, 8-Ball, Beef Boss, Alpine Ace, Chaos Agent, Tomatohead, and Beastmode. There are two objects to interact with: 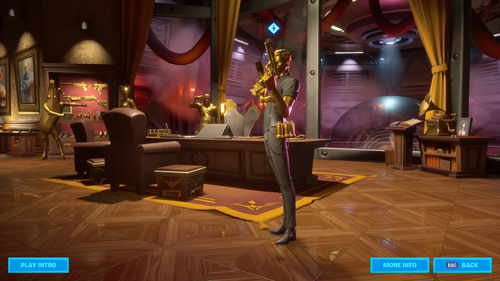 In Midas' room, a device known as the Doomsday Device can be slightly seen in the back of the room. The device's use is currently unknown, however is rumored to use the power of the storm and the Gilded Scepter, a harvesting tool that belonged to Oro to do something in an upcoming event. During the last few weeks of Chapter 2 Season 2, wires were placed around the HQ, and even the Play tab of the lobby, eventually to turn on and begin activating the Doomsday Device. Eventually, a timer appeared in both the Play tab of the lobby and Midas' room set to reach 0 on May 30th at 2:00PM EST, most likely the time of the event. 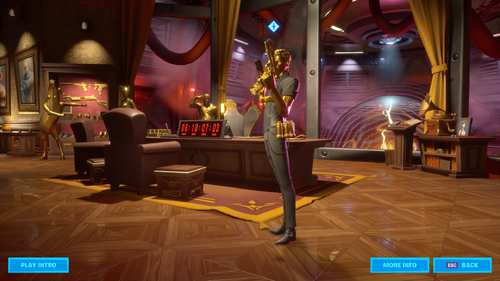 The Upgrade Vault section is the section of which Gear Specialist Maya can be upgraded and customized to a player's choice. The choices consists of up to ten different parts of Maya that can be changed. In order to have a chance to pick the choices, Maya's Challenges must be completed. A challenge becomes available weekly, and can be completed to unlock a choice. However, once players choose a style for Maya, that style cannot be changed back, and also cannot change to anything else. The choice is permanent.

The ? section is a section that involves the supposed secret Battle Pass skin, Deadpool. Every week, a couple of challenges will be given, called Deadpool's Weekly Challenges. The challenges will earn a reward based on Deadpool, consisting of sprays, a banner, a loading screen, a back bling, and the Deadpool outfit. 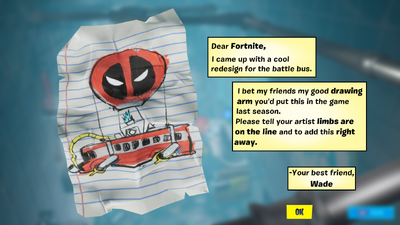 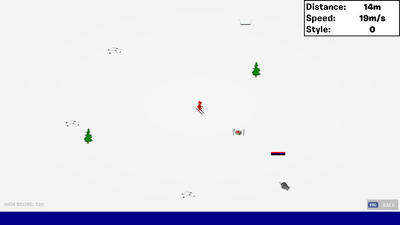 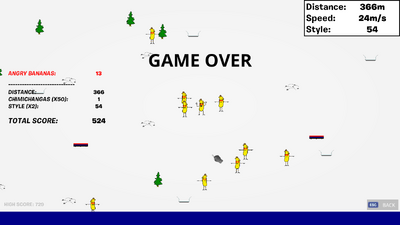 The Spy Games section, originally Coming Soon until mid season, is a section where players can choose a side, Ghost or Shadow, and play Operation matches to gain intel. Each side has a list of 50 abilities that players can use to play the matches. When intel is earned, the player earns more tech. Each team starts with 6 abilities as starter tech.