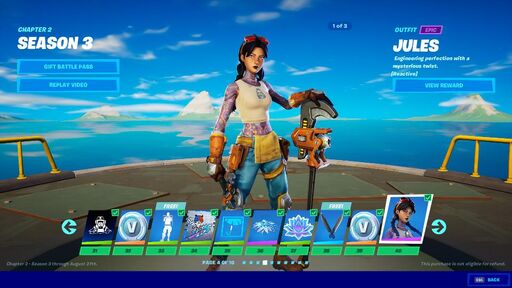 There are two editions of the Battle Pass, one that is freely available to all players and one that is available to purchase in the Item Shop. The latter is the proper Battle Pass, with the free component being noted in game as the "Free Pass". Despite this distinction, the Battle Royale community at large frequently uses the term "Battle Pass" to describe both components together along with the current season as a singular entity, e.g. "Battle Pass Season 3" frequently represents all of Season 3 content. Starting with Chapter 2 Season 1 the "Free Pass" "Battle Pass" have been merged together. Now certain items in the Battle Pass are free however Free Battle Pass owners can't go past Level 100

(V-Bucks). There is also a premium option called the "Battle Bundle", which gives you a 25 level head-start for as many as 2,800

(V-Bucks). You can also purchase tiers for the Battle Pass for 150

The following is a table representing the correlation between Season XP and Season Level:[1]