The Bandage Bazooka is an Epic healing weapon (with a Rare counterpart in the Spy Games LTM only) in Battle Royale that was added on the initial patch of Chapter 2 Season 1. It shoots bandages that heals the player by 15 HP, up to 100 HP, unlike the Bandage which can only heal you up to 75 HP. It has a max ammo size of 5 and will slowly replenish ammo by itself. If you face a wall or the floor and shoot it, you will heal yourself. But it is well suited for healing teammates. If you shoot it at an enemy or nothing, it will drop Bandages. The Bandage Bazooka takes up two inventory slots due to its large size. The Bandage Bazooka is available from Chests, Supply Drops, and Loot Llamas.

In Patch 13.00, it was vaulted and replaced by the Chug Splash. However, Bandage Bazooka came back from the vault on Patch 14.00. It possibly has replaced the Ocean's Bottomless Chug Jug, because the Chug Splash is still avaiable. 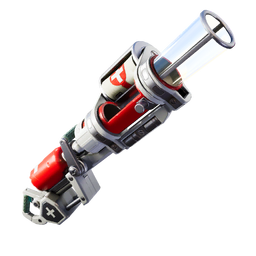 Bandage Bazooka has a chance to appear among other utility items and consumables per loot sources in the following circumstances:

Bandage Bazooka has a chance to appear among all utility items and consumables in the following circumstances: