We’ve saved the most menacing one for last... Venom! Bond with your Duo partner and take on a ladder of opponents in the fourth tournament of the Marvel Knockout Super Series. Place high enough and earn the terrifying Venom Outfit, We Are Venom Emote, Symbiote Slasher Pickaxe, and Tendril Tote Back Bling ahead of release.

Didn’t make the cut and hungry for round two? This time we’re giving players two opportunities in each region to test their mettle.

We’ve added new matchmaking portals to the Creative Hub powered by you - the community! Ranked according to the most popular and fastest-growing creator-made islands, these portals showcase genres like Combat, Variety Games, and Practice matches. Jump in and discover the best of Creative.

We’re also adding a new Creative LTM which cycles through a playlist of popular community-made games. Content will be rotated in regularly, so check back every few days for new experiences!

In this week's update, you’ll be able to SEE your friends’ faces while you play together. We’re introducing a whole new way to play using video chat powered by Houseparty.

The third batch of XP Xtravaganza challenges arrives this week! Get the squad together and take on these party-wide challenges to finish out the Battle Pass in style. 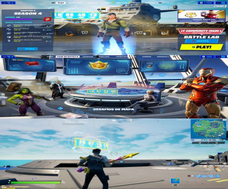 Example of the timer in the Lobby