In this week's update, we’ve included some key Battle Royale changes to aim assist, consumable drop rates along with a whole lot of bug fixes and performance improvements. That’s not all! We’ve introduced our second iteration of the inventory screen. Take a look below.

Save the World stormchasers get access to 4 all-new heroes available to anyone who plays on Xbox One.

Are you as excited as we are for The Game Awards? You should be, because Fortnite is nominated for Best Multiplayer title of 2017! Tune into The Game Awards Dec. 7 at 7:00pm PST. Details on a fun, new, limited-time mode will be revealed live! 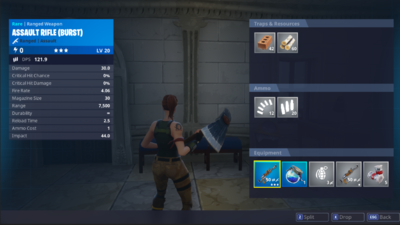 You’ve asked, we delivered. Peep the V2 inventory UI in this update. We wanted to ease a lot of the pain points for controller players and mouse players alike. Let us know what you think on the Official Forums, Reddit, Discord.

Save the World - Exclusive Xbox One Heroes[edit | edit source] 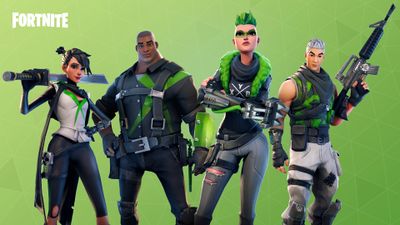 We've introduced four free heroes for all Xbox One players to celebrate the launch of Xbox One X support. Sneak a peek below:

Reminder: PlayStation 4 players have access to their own set of exclusive heroes.

The notes below are already live, and should have been included in previous notes. They are listed below to confirm any undocumented changes. Shoutout to the r/FORTnITE for catching these!

We’ve been exploring how to reduce the size of patches for Xbox. We found a solution, but that means this particular update is larger than usual. (It’s about ~10 GB.)

We are aware of an issue that occurs to some players where downloads are extended in duration and users may believe that a "hang" has occurred. Our investigation tells us that the download is NOT hanging, but the process is taking longer than it should to complete. In the meantime, please continue to let the download and install process complete naturally. We are partnering with SIE to address this issue as quickly as possible.